So the concern is real. But why punish real people because some unscrupulous people might follow you, especially when there are alternatives? Some rights reserved by mith17.

TrueTwit is a service with one purpose: To ensure that that Twitter account that just followed you is managed by a real, live human. Unfortunately, in order to accomplish this, TrueTwit (and other similar services; don’t mean to bash just them) make you do the Stupid Human Tricks.

You know the Stupid Human Tricks. You’ve seen them all over, and you hate them. Here’s an example, from TrueTwit from a couple of years ago. This is called a CAPTCHA, short for Completely Automated Public Turing test to tell Computers and Humans Apart.

Incidentally, the Turing test is named after Alan Turing, the brilliant cryptology hero of World War II who was recently pardoned (which was nice and all, but the British government castrated him in 1952 due to homosexuality, and he’s been dead for 60 years; but I digress).

Turing proposed a way to tell if the person on the other end of a communications line was a human or a computer, and that’s what CAPTCHA does, and what TrueTwit is really all about.

TrueTwit no longer uses CAPTCHAs like the one above exclusively. Now they have you type or respond to one of several types of phrases:

They also post a dizzying array of content and ads on the validation page, making it just a little bit harder to figure out what you need to do to be released from TrueTwit prison. 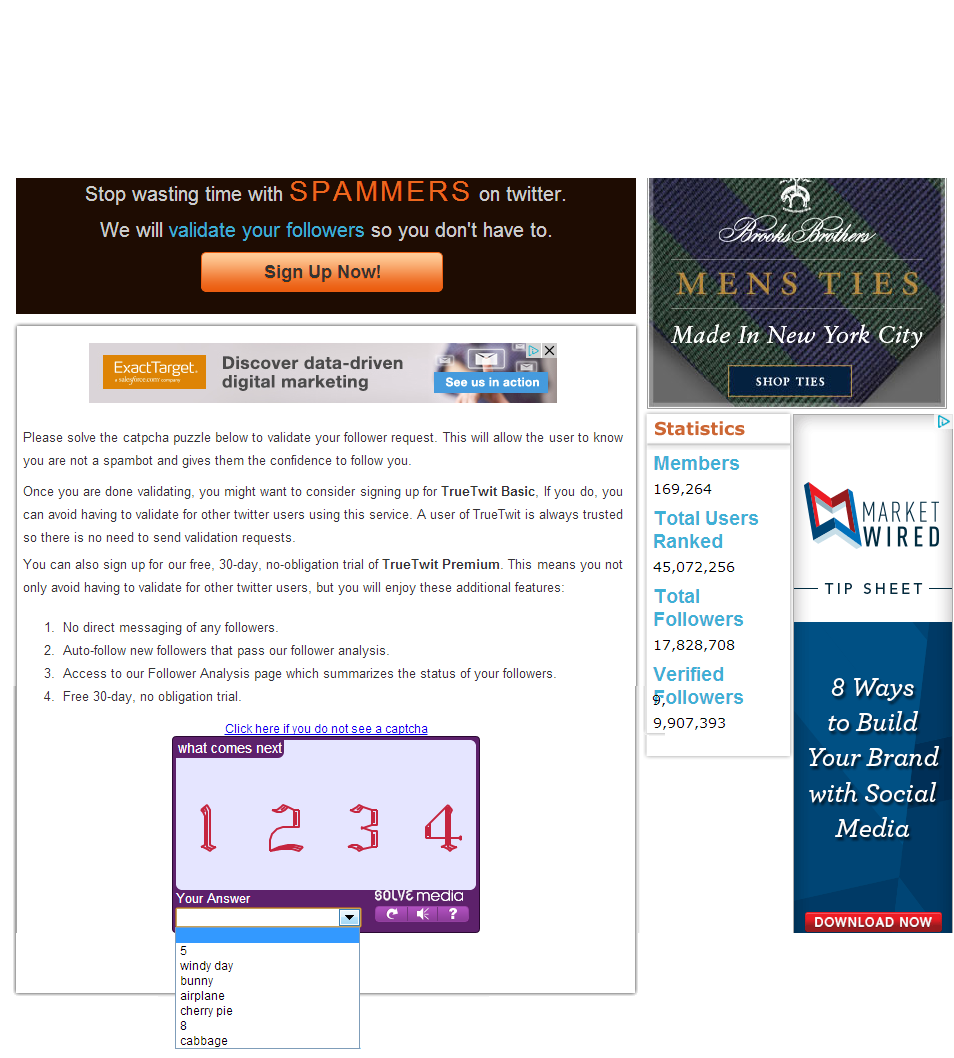 So let’s take a look at what’s going on here. Someone sees a tweet of yours, or otherwise decides that you might be a pretty cool person to follow on Twitter. Your prospective new follower innocently clicks the Follow button and receives an email similar to the following:

What the heck, your potential follower thinks. If they decide to go through with their inclination to follow you, they click the link. But it’s likely that they just abandon their quest to do you the favor of receiving your tweets.

Now let’s leave aside the irony that TrueTwit, in addition to being accurately named, is basically a robot that determines whether you are a robot or not. Let’s think about the hostile act you’ve just committed by putting potential followers through the TrueTwit wringer: You’ve insulted their humanity. You’ve made them run a gauntlet before allowing them to follow you. You’ve subtly declared that you are way more important than they are.

Now I’m not minimizing the problem of fake followers. I get dozens of them a month. I take care of the problem by reviewing each new follower’s profile and if it looks robotic, I don’t follow them back, block them and report them for spam.

It’s quite easy to block someone and report them. Just drop down the little arrow to the left of the Follow button on their profile page and select either block or report (which also blocks).

This is an altruistic action as well as a practical one. If Twitter gets too many spam or block notices about a profile, they will suspend it, and another spammer is discouraged, if only for a moment.

Now if you don’t want to take the trouble to identify your new followers, first of all, I have to ask you: Do you really understand what social media is all about? It’s social media. It’s about creating relationships, not amassing huge numbers of people you don’t know and who aren’t actually reading what you post.

See our books (http://bit.ly/OrderBeAPerson) for more on how to Be a Person on social media.

However, even by checking out your new followers on a regular basis, some fakers are likely to slip by. This can be a problem for several reasons.

The final reason not to use services like TrueTwit is that there are plenty of free services that will help you divest yourself of fake followers. Some to try:

So if you’re thinking of using a Twitter user validation service, think twice.